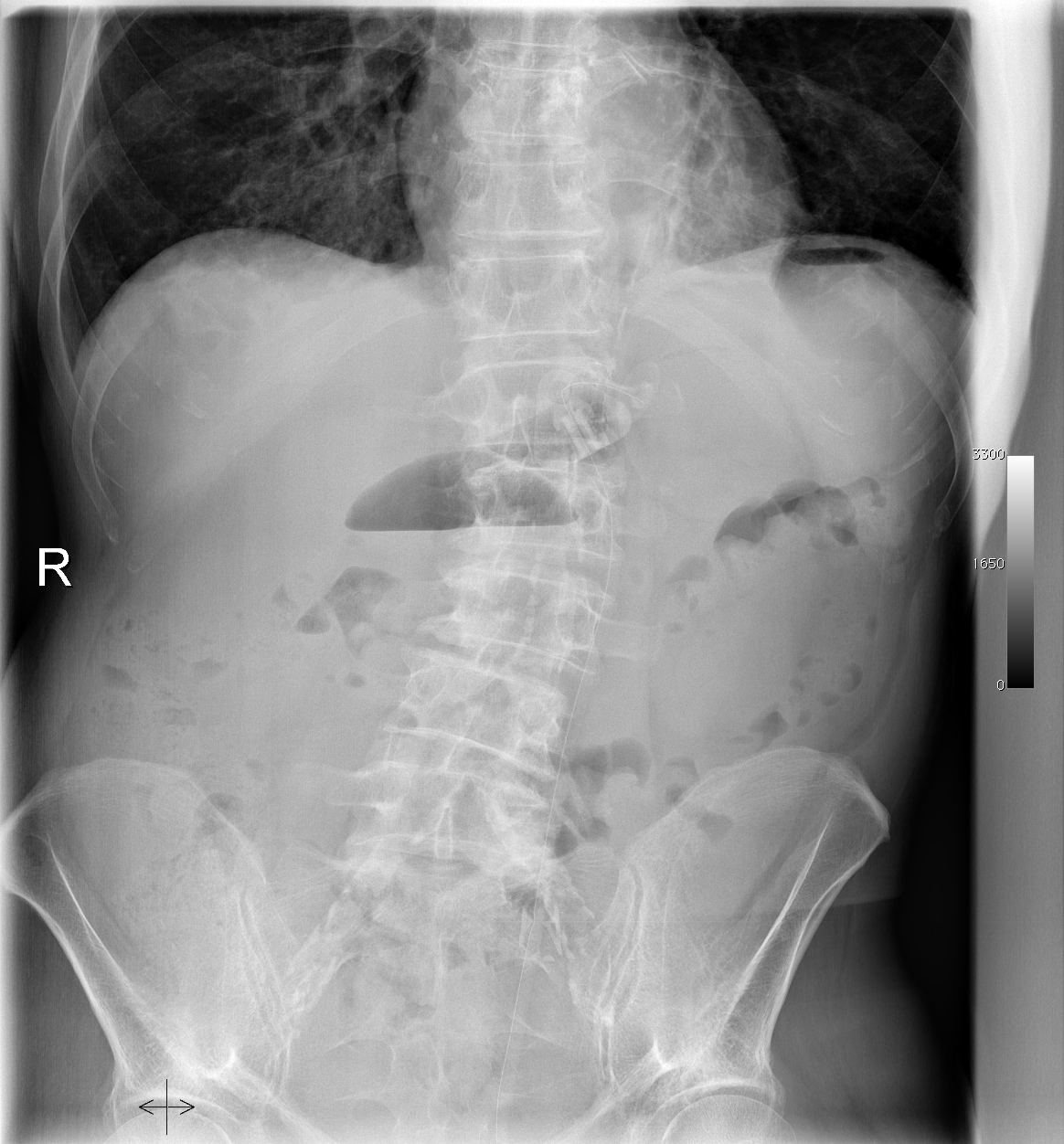 x-ray with levels of fluid

In mechanical ileus, the small or large intestine is usually compressed by external pressure created by surgery-related adhesions and scar formation. This type of ileus is called an adhesion ileus.

The so-called strangulation ileus can be caused e.g. by an incarceration of the bowel in a hernia, by invagination or by volvulus. The latter denominates the twisting of the small bowel around itself and the mesenteric axis.

Invagination of the small bowel involves telescopic inversion of one part of the bowel within another. This creates a mechanical block, which may have ischemic sequelae for the bowel. This clinical picture is much more common in infants than in adults, in whom it may occur e.g. at sites of metastasis in the small bowel.

Copremesis, or fecal vomiting, is typical of the small bowel milieu

Emergency surgery is indicated for strangulation ileus. Mechanical Ileus without vascular involvement generally also requires surgery, but not with the same urgency. If CT exam with oral contrast medium shows a gap in the diameter of the small bowel, it is not likely that is will improve without surgery.

An occlusion of the large bowel can long remain asymptomatic, whereas in the upper small bowel milieu this will lead early to vomiting. The typical sign of an ileus is fecal vomiting, or copremesis, as well as metallic sounding, high-pitched bowel sounds. 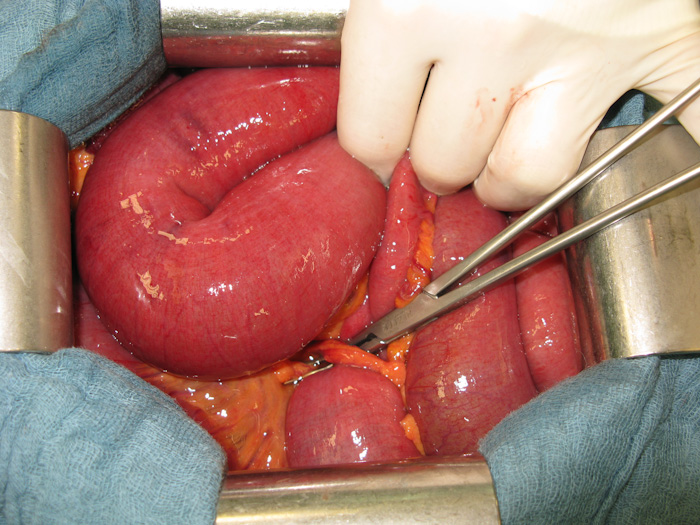 Intraoperative finding of a mechanical ileus caused by scar tissues 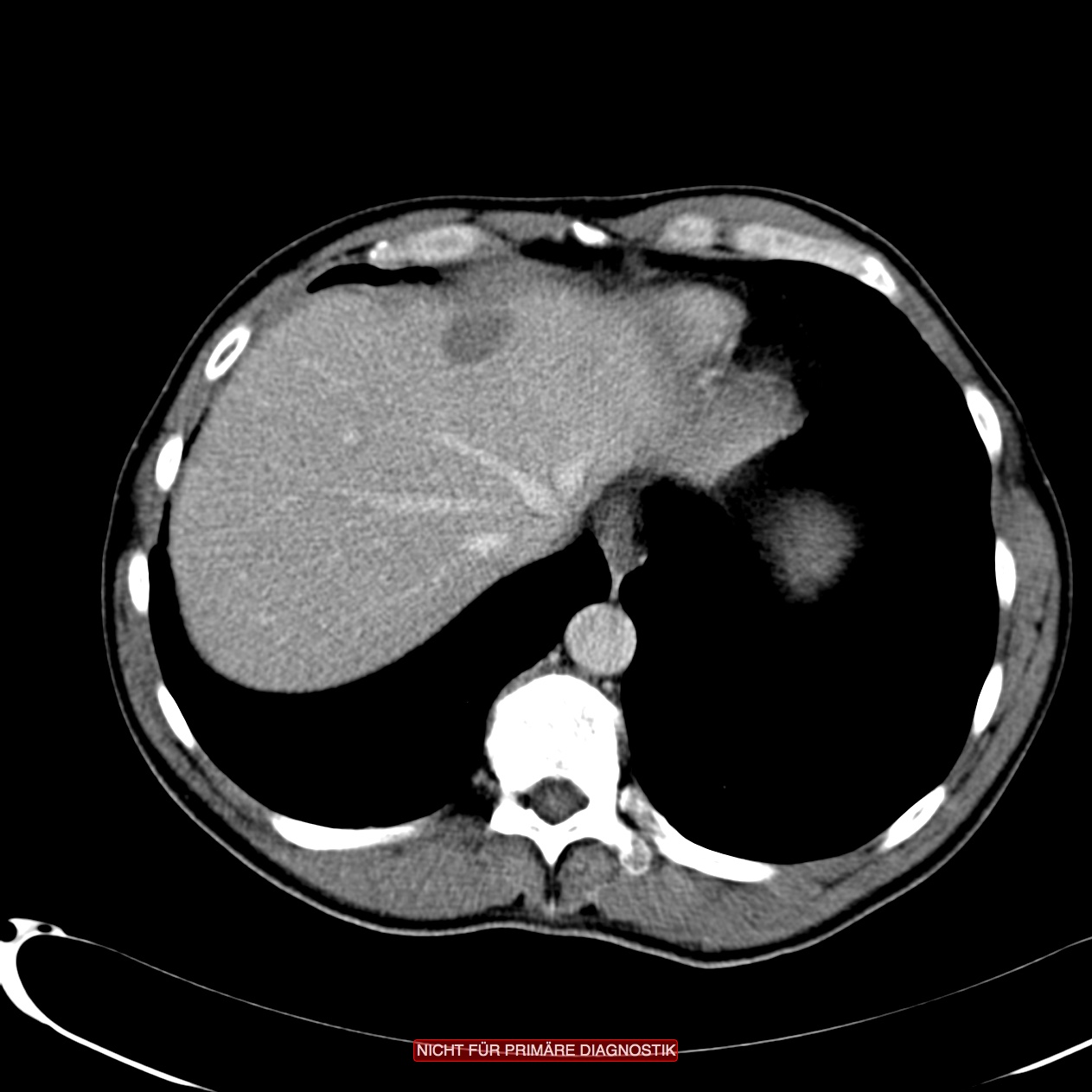 A paralytic ileus is a functional bowel obstruction secondary to paralysis. This condition is often seen after abdominal surgery. Laparotomy, manipulation of the bowel, and opiates paralyze the bowel, which shows little or no peristalsis.
Use of more conservative surgical procedures and peridural catheter in abdominal surgery can markedly reduced the quantity of opiates administered, while at the same time patients are more rapidly mobilized and can begin oral food intake earlier. This so-called fast-track concept has clearly reduced the rate of postoperative bowel paralyses.

If an ileus causes stasis in the small bowel, bowel wall tension will increase dramatically due to the increase in volume. This leads to disturbances of microcirculation in the bowel wall, which initially leads to necrosis and shedding of the mucosa. Venous congestion occurs which, because of the edematous thickening of the bowel wall, leads to lengthening of the diffusion section. The normal reabsorption of fluid and electrolytes is massively disturbed, creating an electrolyte imbalance and volume depletion. Fluid sequestration in the small bowel increases bowel distention, a vicious circle ensues.