Gastroesophageal reflux disease (GERD) is a common disorder that affects up to 10% of the German population with chronic heartburn, its main symptom. It not only lowers the quality of life, but the chronic reflux of gastric acid and bile salts dramatically increases the risk of developing adenocarcinoma of the distal esophagus. 1

Not every reflux is to be regarded as pathologic. The backflow of stomach contents into the esophagus is to a certain extent physiological and happens to everybody, e.g. after a meal. GERD is defined therefore as changes in the esophageal mucosa due to unphysiologically prolonged reflux of gastric acid or bile. 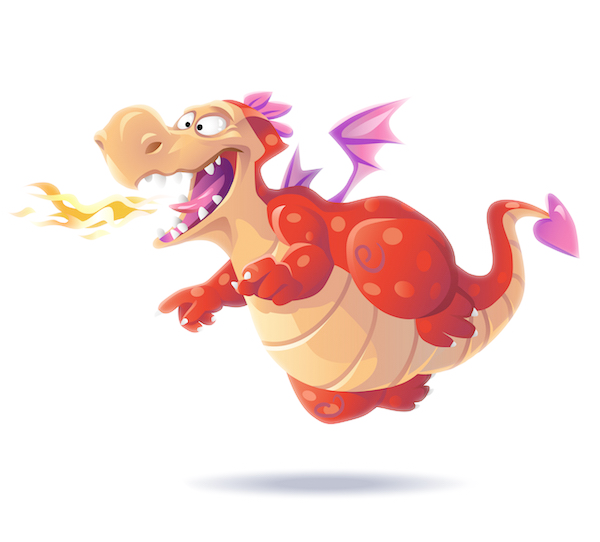 The most common primary cause of GERD is lower esophageal sphincter incompetence, the sphincter not being formed by a sphincter in the classic sense, but by diagonal and semicircular muscle fibers in the area of the gastroesophageal junction. A further important factor that prevents reflux of stomach contents is the so-called angle of His, which is formed by the distal esophagus and gastric fundus. Normally the angle is acute. Anatomic changes can cause the angle to lose its angularity, which facilitates the occurrence of reflux. 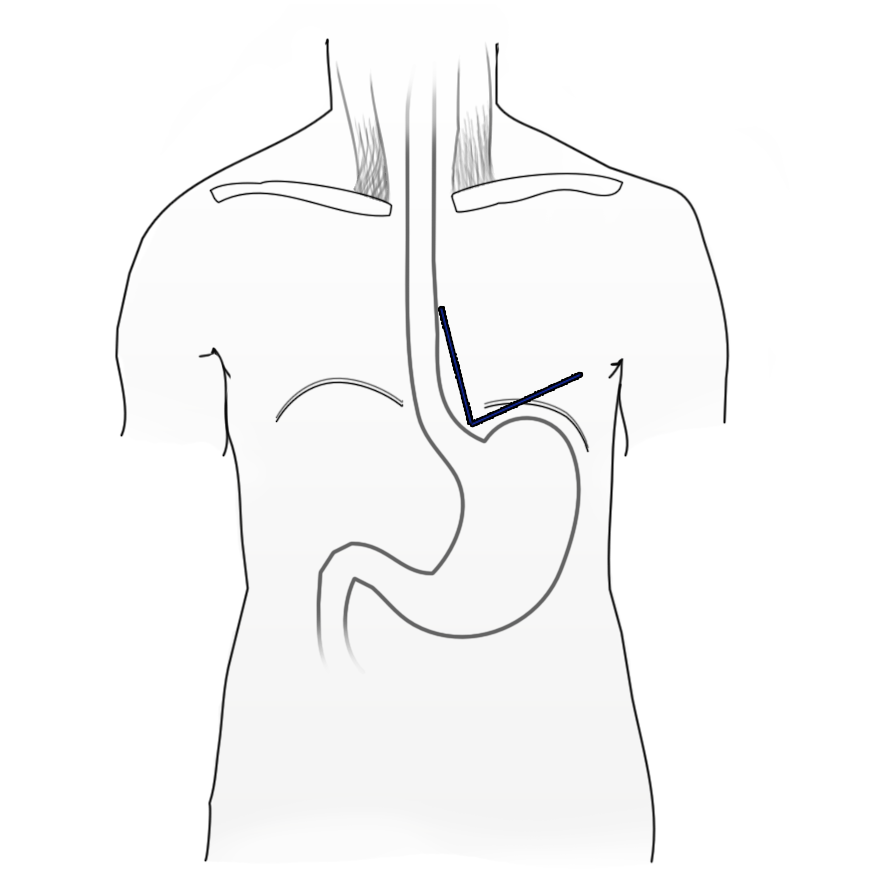 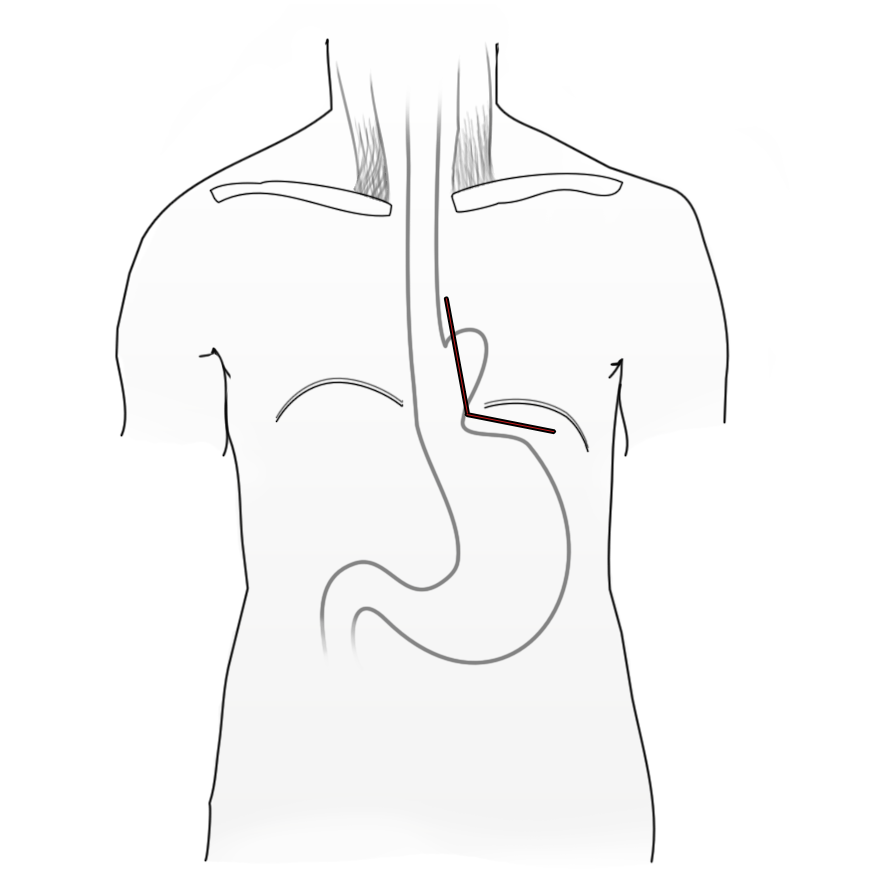 A hiatal hernia, i.e. dilation of the esophageal hiatus with herniation of the stomach into the chest cavity, is often associated with GERD. The extent to which axial hiatal hernias are responsible for the reflux is controversial. They are probably not causative, but do amplify the clinical picture. This is supported by the fact that reflux also occurs without hiatal hernias and vice versa.

Secondary forms of GERD are caused by other organic disorders, e.g. cardiac carcinoma, and pyloric or duodenal stenosis. Cardiomyotomy to treat achalasia can cause reflux, and should therefore be combined with measures to prevent reflux. Reflux is also facilitated by the elevated intraabdominal pressure consequent to obesity or pregnancy and not least by eating habits. Alcohol, chocolate, and fatty foods all promote reflux. 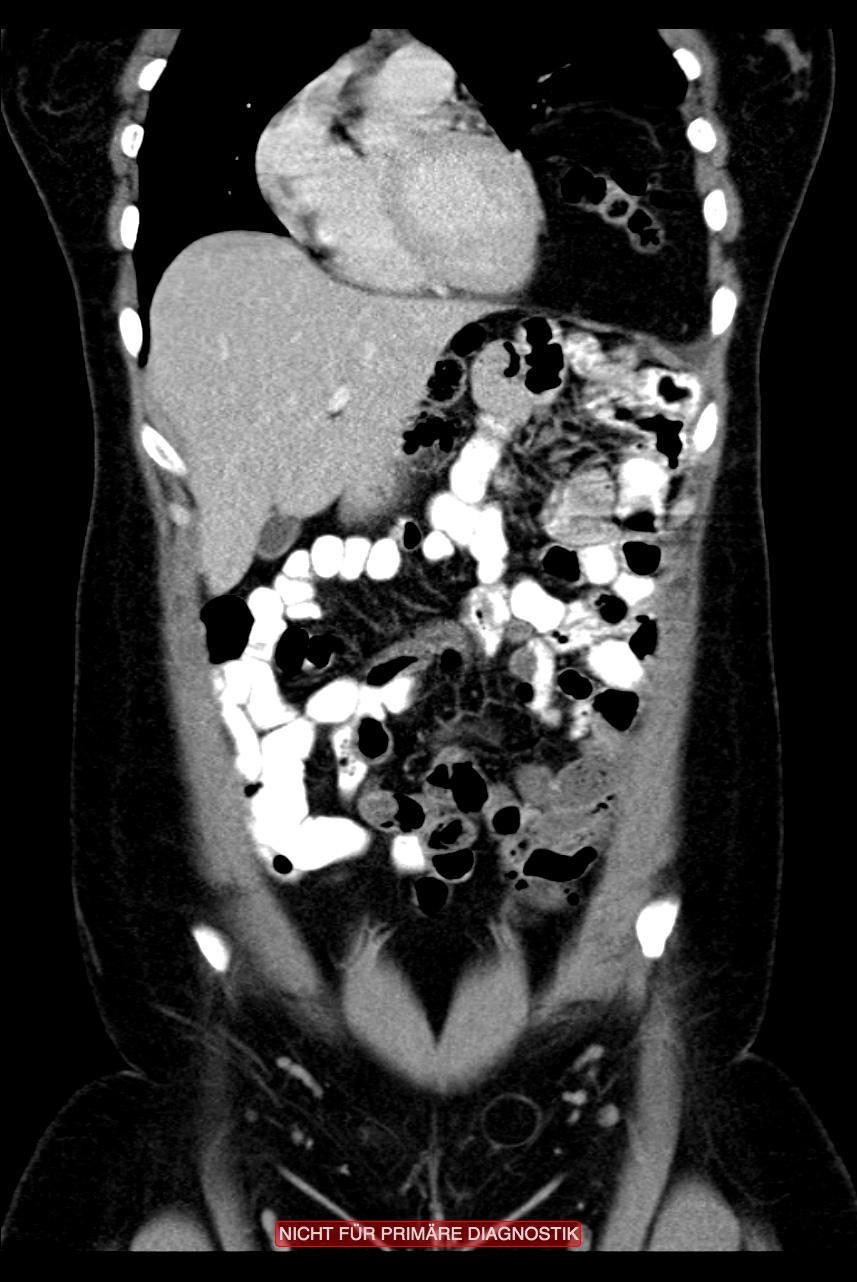 The extreme variant of paraesophageal hernia is thoracic stomach, in which a part or all of the stomach herniates through the diaphragm into the thorax. The term “upside-down-stomach” is used. Patients complain of thoracic tightness, a feeling of pressure, dysphagia, and shortness of breath. Untreated the situation can worsen to a more extreme condition, enterothorax, where not only the stomach but also other abdominal organs, e.g. the colon, enter the thorax. 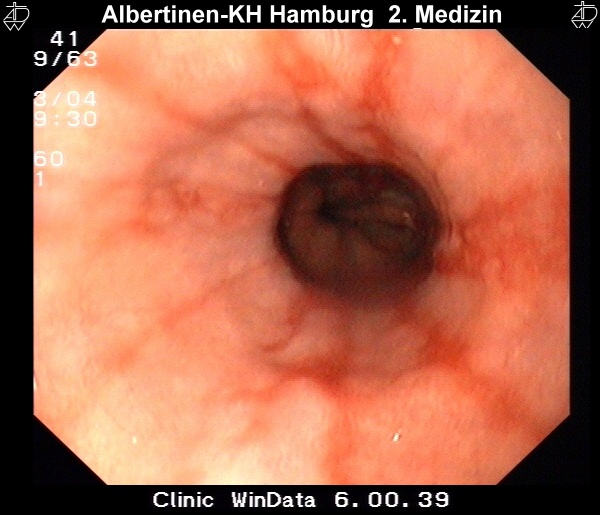 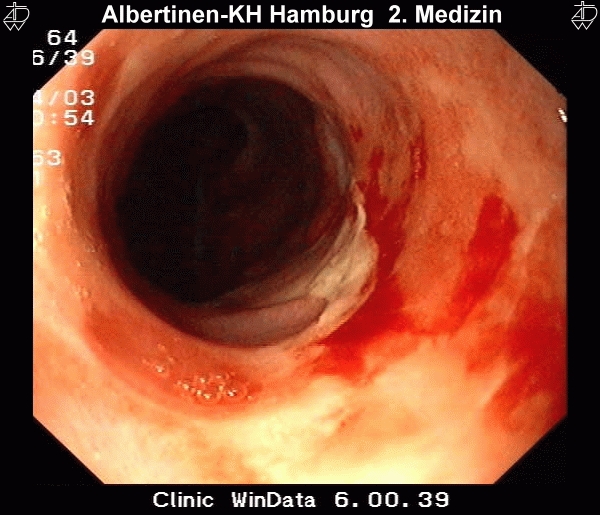 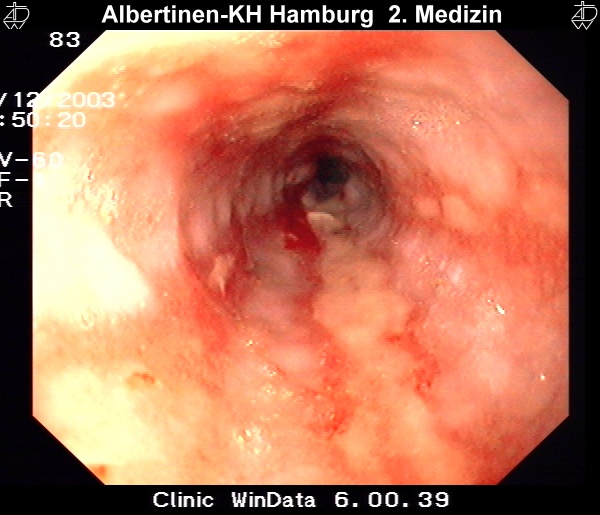 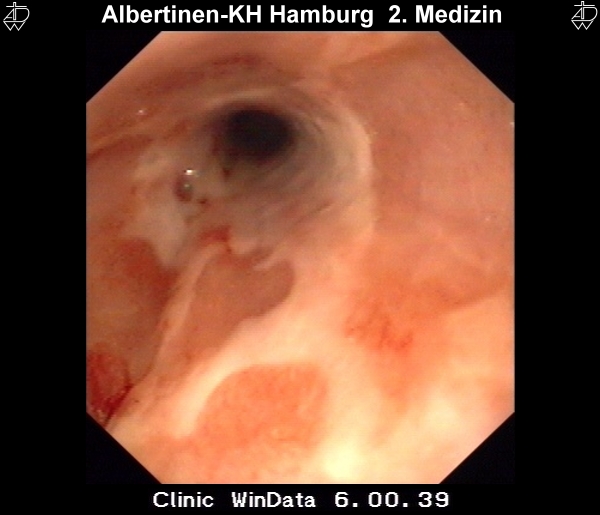 Reflux that persists for a prolonged period of time can cause changes to the squamous epithelium of the esophagus, with consequent reflux esophagitis. Microscopically it is characterized by infiltration of the lamina propria by granulocytes, macroscopically by ulcerations and epithelial defects. According to Savary and Miller, four disease stages can be differentiated endoscopically:

II – Confluent and exudative lesions, not yet encompassing the entire circumference of the esophagus

III – The lesion encompasses the entire circumference of the esophagus

IV – The lesion encompasses the entire circumference of the esophagus

These endoscopic images were kindly provided by the Alberinenkrankenhaus in Hamburg.

The classic symptom of GERD is heartburn. This initially occurs at night when lying down or stooping. Later the heartburn can make it uncomfortable or excruciating for the patient to lie on his or her back. Dysphagia and odynophagia, i.e. pain upon swallowing, can occur, as can a globus sensation.

GERDs may also give rise to unspecific epigastric pain and a feeling of pressure. Backflowing gastric acid can also trigger a reflux laryngitis or chronic irritation in the throat and/or asthma. These must all be taken into account in the medical history and differential diagnosis. 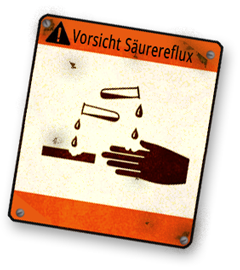 Measurement of  esophageal 24 hour pH provides information on reflux in the esophagus beyond that of snapshot measurements. It is not the occurrence of reflux that is pathological, but the frequency and duration of reflux episodes and the composition of the reflux. Everyone experiences nighttime or postprandial physiological reflux. PH-metry is performed with a portable device (PH meter) equipped with a thin nasogastric probe that has several pH measuring points along its length. The readings appear on a digital display.

The patient can also note with the touch of a key on the device particular events in the course of the day, e.g. meals, sleep, or phases of especially strongly felt symptoms. This makes evaluation of the results easier. Classic PH-metry is limited to measuring pH values, so acidic or alkali reflux cannot be measured. To be able to measure pure volume reflux of stomach contents with neutral pH, impedance measurement is being increasingly used by which analysis of the electrical conductivity of the esophageal milieus can register changes upon reflux of non-acidic or non-alkaline stomach contents. The results of the acid measurements are summarized in the DeMeester score, which summarizes the duration, extent, and quality (Dauer, Umfang und Qualität) of the reflux episodes and the speed of the realkalinization. Above a certain threshold value (> 14.72) the score indicates the presence of GERD.

Differential diagnostically this can exclude e.g. a motility disorder of the esophagus such as achalasia where so-called simultaneous contractions involving the entire length of the esophagus prevent antegrade peristalsis.

In unclear cases or to achieve further differential diagnostic clarity in motility disorders, a barium swallow test can be administered. 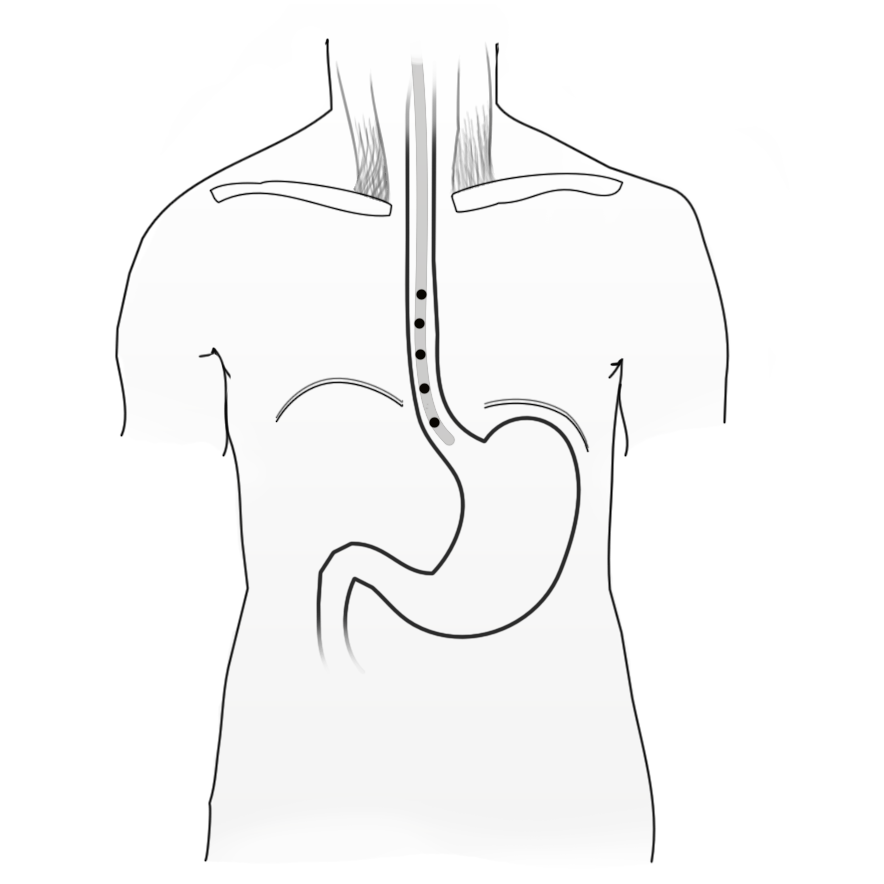 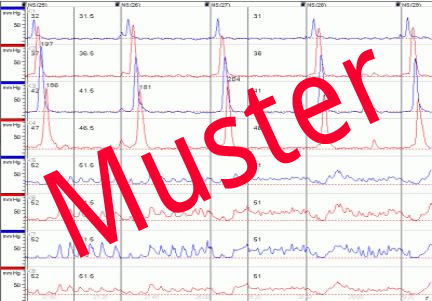 Here you see a fluoroscopic image of a thoracic stomach. Clearly visible is the stomach bulb located above the diaphragm in the thorax. Patients report a retrosternal feeling of pressure, dysphagia, regurgitation and increasing difficulty breathing.

Untreated thoracic stomach can progress to a so-called enterothorax, in which further portions of the abdominal viscera enter the chest cavity. 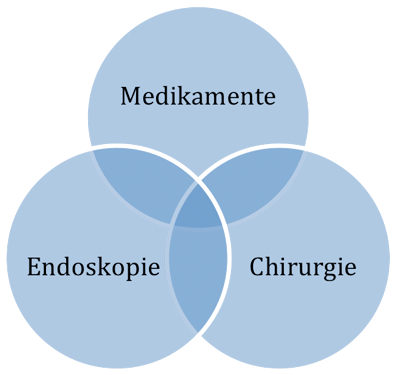 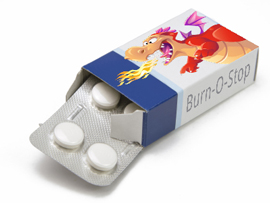 Proton pump inhibitors are drugs that effectively prevent the production of gastric acid. Treatment should always continue until lesions have completely healed. Because GERD is a chronic disease, however, long-term drug treatment is often necessary, which is not least a question of costs.

General recommendations are weight reduction, avoidance of triggering noxa such as alcohol, nicotine and caffeine, and elevation of the upper body during sleep.

Multiple endoscopic therapeutic approaches are available on the market that attempt to strengthen the gastroesophageal junction sphincter. Some of the options imitate the principle of antireflux surgery. The results, however, are generally disappointing and some of the methods have already disappeared. Moreover, these methods are not completely free of complications and side effects. The main argument for an endoscopic procedure – the low morbidity – does not hold, especially against the background of its overall low morbidity and lethality rates.

Operative treatment of GERD attempts to create or reconstruct a reflux barrier at the gastroesophageal junction. This is done with fundoplication surgery, in which the gastric fundus is wrapped around the esophagus like a collar to serve as a barrier against reflux. Numerous techniques have been developed, the most common being the Nissen-Rossetti 360° fundoplication and the Toupet 270° fundoplication. Additionally, the esophageal hiatus is narrowed, thus a hiatoplasty is carried out and the Manschette secured against slippage by a fundophrenicopexy. The results achieved by surgery are excellent, surgery is more effective in treating GERD than either drug therapy or endoscopic procedures. Laparoscopy is the present standard and has very low morbidity and lethality.3 This is true regardless of which fundoplication technique is chosen, but since the Toupet 270° fundoplication has lower postoperative dysphagia rates, it is the current standard.4 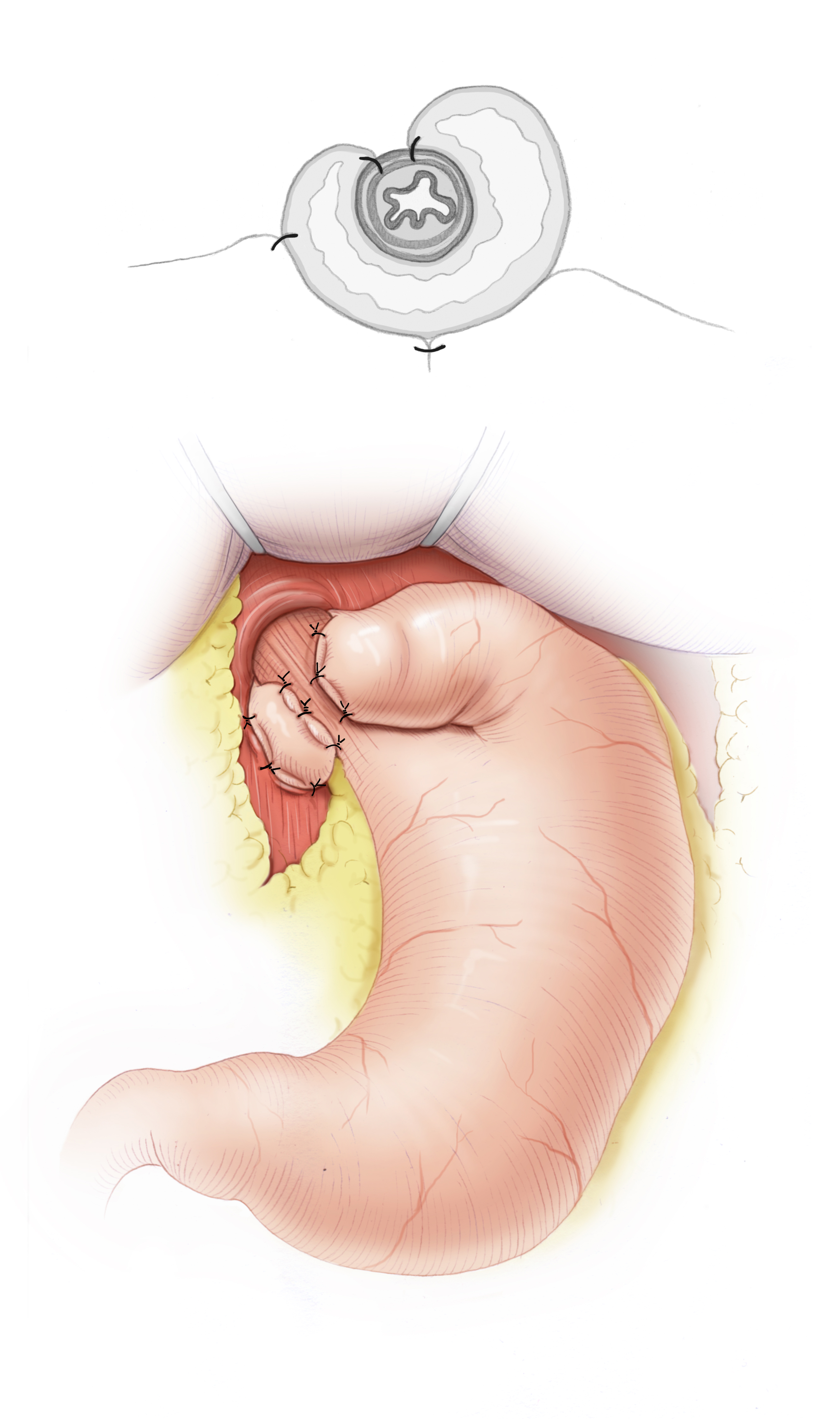 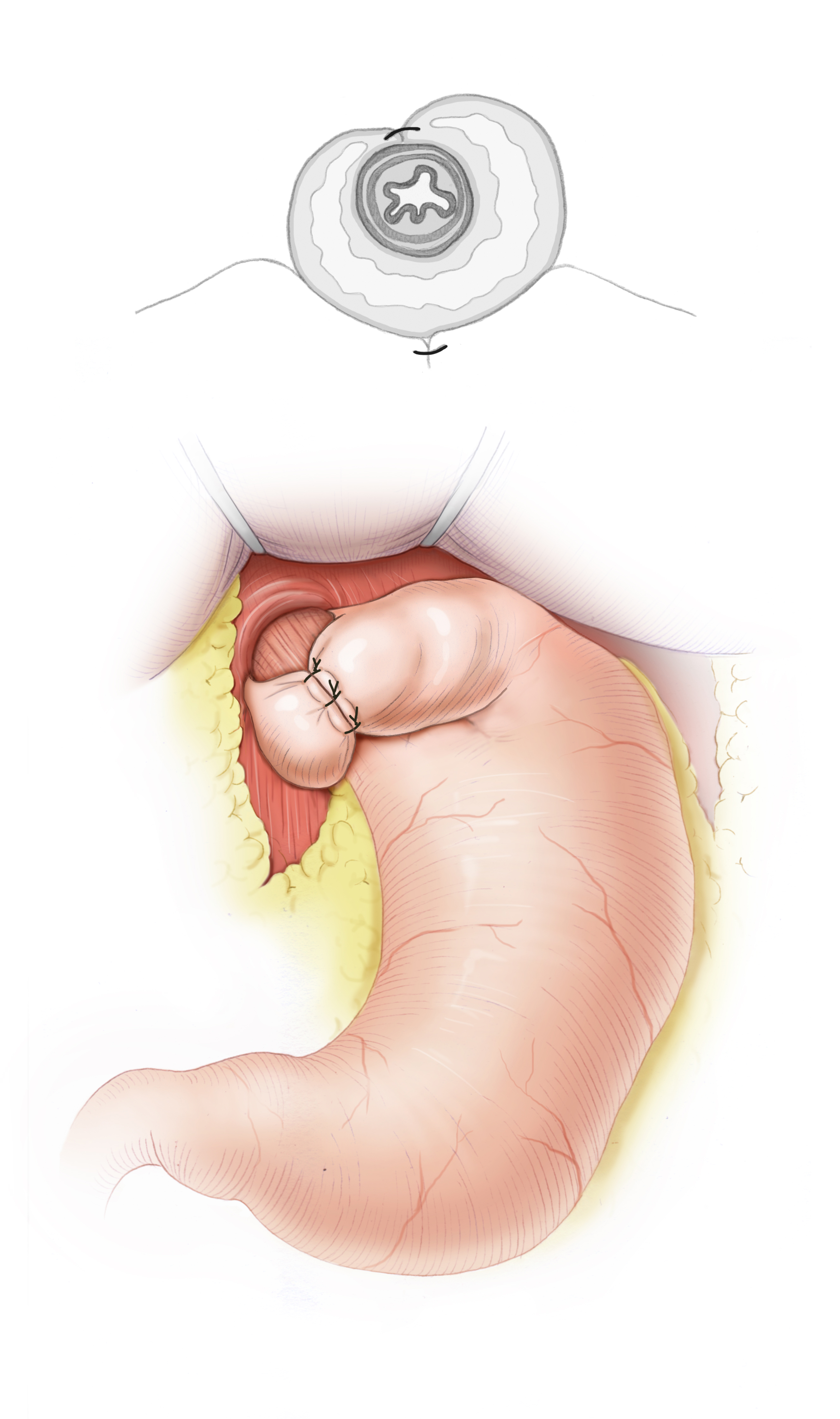 Based on the above, surgical therapy would seem to be the option of choice for patients with GERD. In reality, however, patients are not sent to surgery until drug therapy has been wholly or partially ineffective.

This situation is also a negative predictor of poor postoperative result. Patients who respond well to proton pump inhibitors are the same patients who benefit from surgery. In Germany patients are operated on after drug therapy has failed, was not tolerated, or had been declined.