Diverticula of the esophagus can be further distinguished with regard to their origin into pulsion and traction diverticula. There are also functional diverticula, i.e. temporary outpouchings caused, for example, by spasms. Pulsion diverticula are formed when the mucous membrane is pushed through the muscular lining of the esophagus by pressure from within. The pressure is greatest above the upper and lower esophageal sphincters, so it is here that the diverticula tend to occur.

In the hypopharynx, the hole between the superior pharyngeal constrictor muscle and the cricopharyngeal muscle form the so-called Killian's triangle. Impaired opening of the upper esophageal sphincter at this site can lead to a Zenker’s diverticulum, usually on the left side. Above the diaphragm epiphrenic diverticuli can occur, these too are usually pulsion diverticula. A true diverticulum (echtes Divertikel) is the traction diverticulum, which chiefly occurs at the level of the tracheal bifurcation. If it was once assumed that scarring after e.g. pneumonia or tuberculosis was responsible for development of diverticula, today it is assumed rather that embryonal Gewebebrücken, which lead to distortion as the esophagus and trachea grow in length and formation of the traction diverticulum. Zenker’s diverticulum are divided in the Brombart classification into four stages. An indication for surgery, however, exists independently of stage, since it can assumed from the pathophysiology that the disease will progress and the diverticulum increase in size. 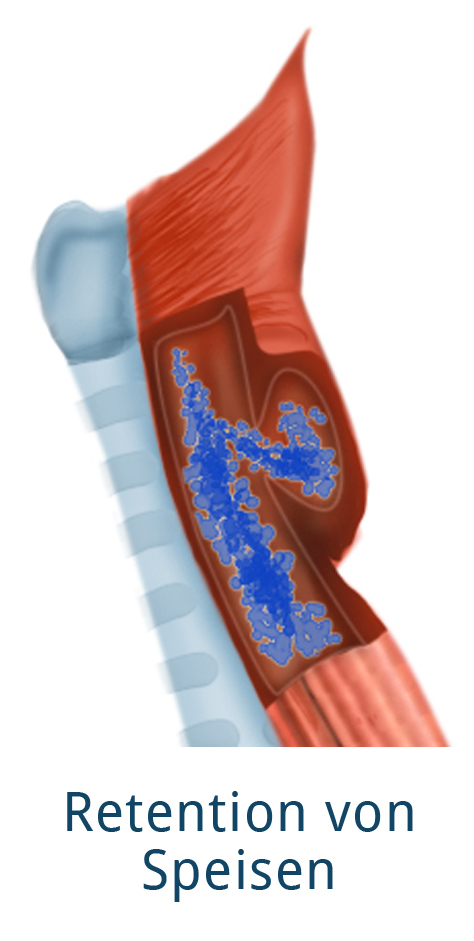 Like other disorders of the esophagus, the main symptom of esophageal diverticulum is dysphagia, with regurgitation and vomiting occurring in later stages. An important diagnostic clue is the nature of the vomitus: if it is acidic, it has already mixed with the stomach’s gastric acid. Vomiting of undigested food should always be suspicious for a diverticulum, which can capture the food. Further symptoms are halitosis, globus sensation, and odynophagia (painful swallowing of foods and liquids caused by inflammation in the diverticulum).

Clinical findings and medical history offer the decisive clues, apparative modalities confirm this diagnosis. The method of choice is the barium swallow test, in which the patient is asked to swallow a barium containing liquid and fluoroscopy allows both visualization of the diverticulum and of the swallowing act as the liquid passes through the pharynx and esophagus.

Endoscopy can be used as support, although it can overlook a diverticulum. Especially for epiphrenic pulsion diverticula, the pathogenesis should be further clarified with manometry since they could result from an undetected achalasia.

The indication for surgery in Zenker’s diverticulum is always independent of stage. Traction diverticula usually do not give rise to complaints. In epiphrenic diverticula, the underlying motility disorder should always also be treated.

Zenker’s diverticula can be removed by open surgery, which is usually carried out with a stapler. An obligatory part of this treatment is myotomy, since otherwise the causal high-pressure zone cannot be eliminated and recurrence threatens. Alternatively, a transoral Schwellenspaltung can be performed in which the nach oben gerichtete Steg between the diverticulum and the esophagus is dissected with a stapler. Though this does not remove the diverticulum, it effectively stops the retention of food or pills.

Epiphrenic diverticula can be laparoscopically removed through a transhiatal access. The procedure then consists of transhiatal diverticulectomy and, always, laparoscopic Heller myotomy. The myotomy on the upper esophagus sphincter eliminates the underlying high-pressure zone, thus preventing possible recurrence. Since the esophageal wall after the myotomy consists of only the extremely thin muscular tube, a Dor or Thal fundoplication should always follow. This covers the defect with a sleeve formed from the gastric fundus and it also serves as an effective protection against reflux of the gastric contents. 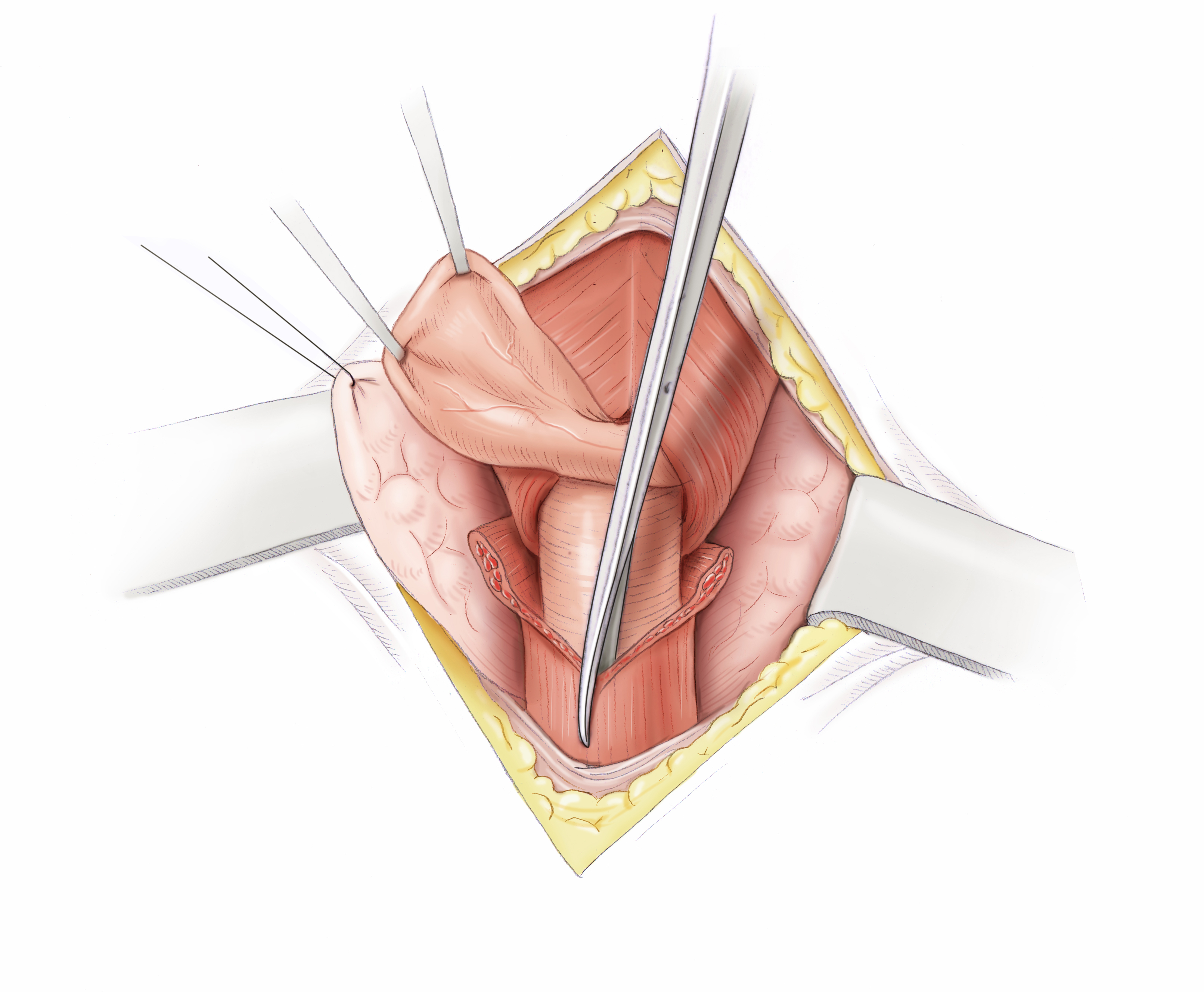 Myotomy to eliminate the high-pressure-zone Resektion of the diverticulum with a stapler